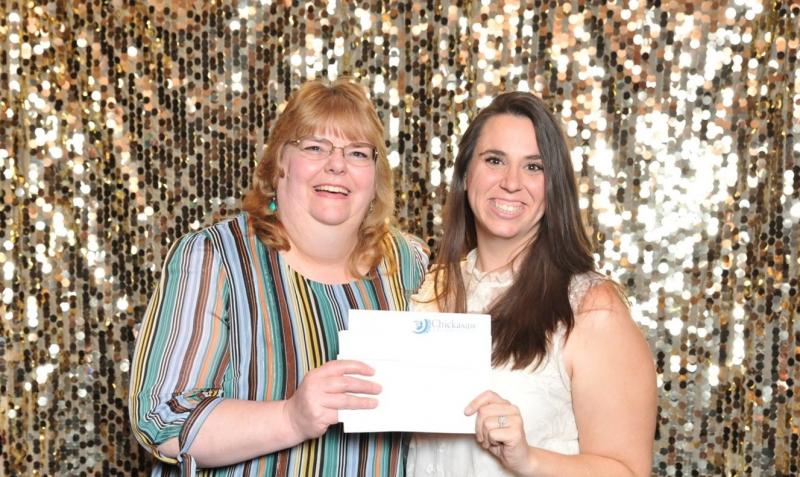 Linda Littlejohn is the Receptionist at CNI Headquarters in Norman, OK. She greets everyone by name with a big smile and kind word. She recently took a self-described “trip of a lifetime” with tickets she won at our employee recognition event called the Wowzers. She had to wait two years because of Covid-19 and had to change her destination but her trip to Ireland was incredible! Linda is pictured here with her daughter in law, Courtney, who traveled with her. Please click here to read Linda’s story in her own words. Thank you Linda for letting us share your adventure and thank you for your “Service without Reservation” to CNI!

At the Wowzers in February 2020, everyone is sitting in anticipation, contemplating where they would go if their names were called. The prize, two tickets to anywhere in North America or Europe.  Courtney (my daughter-in-law) and I were teasing about how we would go to Scotland, “to find out if there really was a Loch Ness Monster”. We all listened in anticipation as David read, MY NAME!  I was so utterly surprised, all I’ve ever won before was a sub sandwich, from a radio station in 1988.

Courtney and I went home that night and immediately started planning dates and where we really wanted to go. We were up until 4 am planning, researching and making lists of everything we wanted and needed to do.  We decided we would go to Italy in May which is the prime time to go for the weather and before the summer crowds arrive. This was short notice but otherwise, we would have had to wait until October. We were so excited that waiting wasn’t an option…or so we thought! Unfortunately, as we all know, Covid reared its ugly head and the world shut down.

Two years from the original date we were supposed to take our trip, we finally got to board the plane.  Not to Italy as previously planned, but instead to Ireland. Why the change of venue?  Well, Ireland opened their borders without all of the requirements Italy still has in place, and their Covid numbers weren’t as high.

Little did we know, this trip turned out to be just as exciting as Italy would have been, but in different ways.  We got to drive on the opposite side of the road, on the opposite side of the car. I had to go to another country to see how wonderful electric cars can be, our Toyota Yaris recharged as we drove.  No charging stations?!  Around the southern half of Ireland on two and a half tanks of gas! Epic. We rode Gypsy Vanner horses on the beach. We visited four castles, one where Braveheart andThe Big Red One, were filmed. Another is where Courtney got to kiss the Blarney Stone. I was too chicken to hang my body over a 700 ft ledge, and anyone who knows me, knows I have no problem talking! We visited an Abbey from the 15th century, neolithic structures predating the pyramids in Egypt, the most westerly pub in Europe where Far and Away was filmed using the actual villagers from the town in the movie. Parts of Star Wars was filmed near there too. We also went into the pub where Leap Year was filmed among many other interesting and fun things. We didn’t look at locations and say let’s go where this noteworthy event happened, things just worked out that way.

The Irish culture was incredible. It was like stepping back to a simpler time in the states, when you would pump your gas, and then go into the store to pay. It was nice to sit and listen to the lilt of the Irish voices as we were out and about, to see buildings and streets that existed Centuries before The United States was a Country, to watch the different ways people interacted with each other. The Irish people we met were so laidback, kind and considerate.  We got lost and couldn’t find our room one night, we pulled into the wrong house and the couple offered us a room in their home before realizing we were on the wrong side of the bridge as our air BnB. They were so thoughtful and genuine, we were a little disappointed we couldn’t have visited more with them.

I think what made this trip truly memorable was the fact that rather than build up all of these grandiose expectations, we went with the flow. We planned where we were staying and the logistical details but when we got to Ireland, we concentrated on the simple pleasures:  The gracious, welcoming, caring spirit of the Irish people; the beautiful landscapes surrounding us, whether it was a renowned castle, or flowers on a tree outside of our Air BnB.  I will forever be grateful and feel immensely blessed to have won the trip of my lifetime.  Now, just to figure out how to go back! There is too much to see, to think one trip could be enough. Oh, the possibilities!